The Mid-Autumn Festival is held on the 15th day of the 8th month in the lunar calendar. Being on the 15th , it is always a full moon. Mid-Autumn Festival is the great time for children, lovers and the wedding party. Regarding to the children, they have a big lantern procession or competition in the neighborhood streets. The lovers have theeir dates out cruising in the streets and enjoying the lanterns in the markets. That day is the most popular day for wedding. It is still puzzling me why the women like to choose that day to get married.

About 3,000 years ago in China, Hou Ngai (后羿) was a powerful hero sent from Heavenly God (Emperor Y¸k 玉皇大帝) to the earth to save people. He was famous for shooting down nine out of ten suns to save farmers and animals on earth from the unbearably scorching heat of all these extra suns. The people loved him and crowned him as the Emperor, and his wife Chang-O (嫦娥) as the Queen of them. Chang-O was a beautiful woman with a kind heart.

Hau Ngai became obnoxious and greedy for power when years went by. He loved power and control, and made the people die for him. Hau Ngai wanted to be become immortal and live forever. He got an immortal pill, which was hidden in a secret urn. Chang-O found out this secret . She took the pill, with her mind to save the people in the country. After swallowing the pill, Chang-O became lighter and lighter and flew up in the sky and landed on the moon. Actually, we could say Chang-O was the first one landing on the moon, not those American Astronaunts in 1960s!

There's many versions of this story; above was the one I was told when I was a kid. I remember I went to a Chinese movie in 1960s about this story.

Back in the end of Mongol Yuan Dynasty after the great time of Marco Polo's visit, the Han people with other minorities became intolerant of the Mongols' brutal maintenance of China. Some revolutionaries planned to use this Festival as an opportunity to organize uprisings. What did they use to communicate without being caught and beheaded?

Moon cakes (jyut beng, 月餅) were made and eaten at that time (see Food). The bakers put a note detailing the plans of the revolution inside the center of each cake and sold them in the markets mainly with all the locals.

When I was young, my parents brought me and my siblings to a market of lanterns where we found paper lanterns made in different shapes and in different kinds of animals, but no dinosaurus. Some were made as helicopters, airplanes, or boats. They made the most popular lanterns according to the Chinese constellation of that year. Like the year of Rabbits, they used a lot of tissue papper and translucent paper to make a rabbit about 1 foot tall and 11 inches times fourteen inches in area. This was big enough for a child to lift it by a bamboo stick or to pull it.

Of course, we had those traditional plain colors rounded or ovaled folded up lanterns as well. Those were very cheap, but they gave children a lot of pleasure and excitement.

The big time began when the sun set around 7:00 p.m. (mid September in U.S.). In Hong Kong, the streets were very narrow and busy. It was dangerous for the children to walk and proceed like kids in North America during Halloween time. Instead, after a quick dinner, the children of a whole high-rise compound got together and went up to the roof top garden and celebrated there. Some patrolled down to the parks nearby. The children held up their lit lanterns with a thin bamboo stick. They sang, screamed and laughed along the whole way.

The parents set up a food table where we found the most popular fruits like lychee, pomelos, oranges, apples, starfruits, Japanese pears, longan (龍眼), and grapes. We had nuts like horns of a bull (len gok, 菱角), walnuts, and peanuts. Of course, the moon cakes were the main characters.

It was also the tradition for the married girls to go back and visit their own families. The sons-in-law carried boxes of moon cakes to present to their in-laws with gratitudes, I suppose. I remembered my aunt and her husband brought a box of moon cake called 'Seven stars and a moon' (七星伴月). Seven little moon cakes with different fillings circled around a most beautifully decorated one. It was quite expensive for a common worker to consume a box. Moon cakes were not made cheap in 1960s - 1980s. My grandmother joined in a moon cake association and paid by installments to get a dozen boxes of moon cakes. They sold out easily. Usually, the majority of the items sold were the gift present, and the actual consumption was low -- a lot of waste in the trash.

I introduced this celebration to my husband and he loves to eat moon cake; of course, any American loves sweets! He especially loves lotus seed paste, so this is great for him.

Every year since we had our daughter, we tried to hunt for lanterns and hang them up on a rope, dangling between two trees or attached to nails on our home's walls. We lit the candles inside the lanterns when the sun set. Each year, we have arranged the lanterns in different patterns.

Last year, I invited a lot of children around my kids' ages, and had a lot of fun. I really regret that in the U.S. I cannot find lanterns in the shape of animals, like what I used to have when I was a kid. Delicacies made in animal shapes were also my preference.

My husband loves durian (lau lin, 榴蓮). So, as part of the celebration, he hunts for these exotic Southeast Asian fruits and has started our American-Chinese version of celebration in our family.

Mid Autumn festival is actually a celebration of harvest for the Chinese. It is a fun time for children. 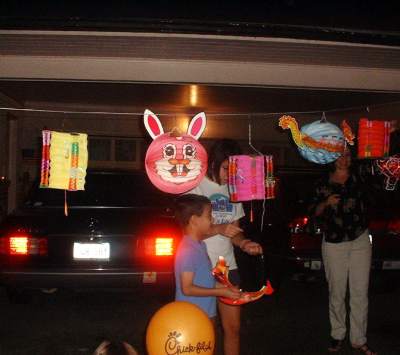