I remember we hold family birthday party in turn each year for my 2 sons at home and the invitees were their friends, classmates and sometimes the mothers of the small friends. We always prepared a birthday cake with an appropriate number of candles. Red eggs were also placed as one of the items in the menu. Traditionally, 2 red pockets were given to the little host. Their friends' mothers usually liked to present toys. Photos were taken. Though a lot of work had been done, we considered that it was worth our while to do that. Our memory of such cheerful activity may be occasionally be refreshed whenever we look at the photos kept in the albums at later dates. I believe all fathers and mothers are the same.

When the boys have been grown up, the celebration for them is the same as those for the adults. Either holding a family gathering at home or taking buffet dinners in hotels or Chinese dinners in restaurants. Presently, Hong Kong Chinese seldom invite their relatives and friends to come to celebrate their birthdays at home or restaurants except the rich people or those having high dignity in the society.

An egg contains yolk. In Chinese, the sound of the word 'yolk' and another word ' king' are the same----WONG. Therefore, it is hoped that once the kid has eaten the red eggs on his birthday, he may behave well through out the whole year under the control of the king. Colouring the eggs in red is a way to make the eggs looked more attractive. Why in red, not in other colours? In Chinese, only 'red' means prosperity, good health and luck. On the contrary 'blue' and 'dark' represent sadness. These 2 colours can always be seen in funeral homes. Similarly, it is the same in English otherwise Paul Anka wouldn't sing' I am a lonely boy, lonely and blue!' 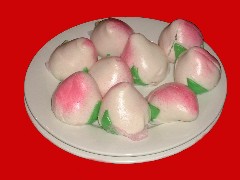 Many hundreds of thousands of years ago, there was an unbeatable and supernatural monkey king, Suen Ng Hung who announced himself to be the Great Saint of the Entire Heaven. He had 2 immensely resourceful powers. 1. He could fly 108,000 miles after one single somersault in cloud. 2. He could adopt 72 different disguises not only human beings.

One day, he stole and ate up all longevity peaches in the Garden of the Royal Wong Moor Neung Neung (Auntie Wong Moo) in the Heaven. The peaches in the Garden were fruits requiring 3,000 years to blossom and another 3,000 years to become ripe longevity peaches. If any body ate one of the peaches, he would become a fairy who can live forever! Of course, that act had made the owner of the garden very angry, and there were many troubles thereafter. The said period was described as the Disturbance by the Great Saint of the Entire Heaven in 'The Journey to the West', one of most famous story books in China. (By West, it means India.)

Based on the above story, the people later used to prepare a kind of dim sum made up like a peach called birthday peaches. They are usually presented at the end of the menu of a birthday dinner party. It was said that if anyone who has eaten one of the peaches he would live as long as 100 years. Therefore everyone will eagerly take one share even though he/she is too full.